Spanish food is more than just croquettes, tortillas and paella! There are many more dishes to be tasted in Spain! Check out this ultimate list of the yummiest Spanish snack foods my belly has ever enjoyed. What makes me an expert on Spanish snack food, you may ask? Now I may not be a Michelin-starred Spanish chef, but having tasted hundreds of tapas in Andalucia, Catalunya, Madrid, and the Balearics I certainly know what I like! Besides, three years living in Spain has given me quite enough time to taste plenty of Spanish tapas and dishes, hasn’t it?

As the latest foodie blogposts on Malaysian Snacks and The Best Restaurants in La Linea were a great success (a slight exaggeration here but they’re definitely the most popular articles on my blog), I decided to give you a guide to Spanish food which is tasty, cooked with passion and certainly worth trying. 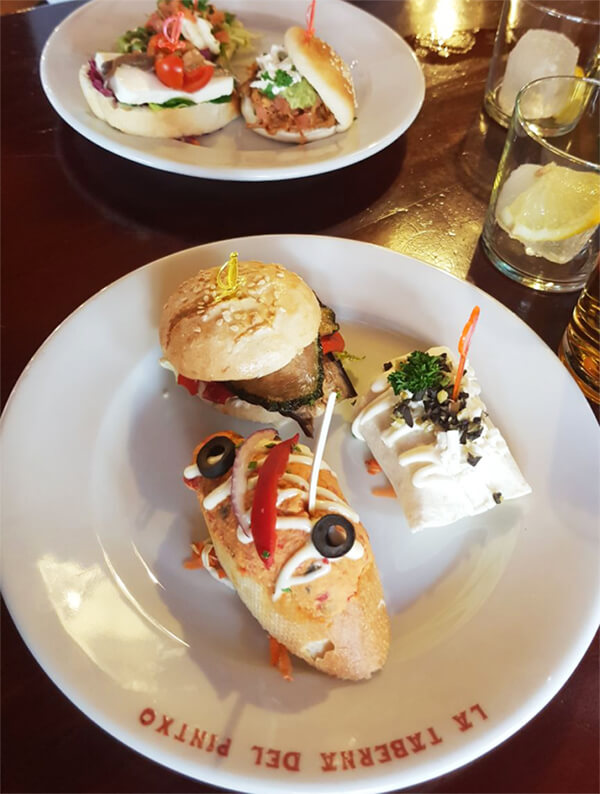 What is ‘Spanish snack food’?

Spanish snack food can be anything you eat in a mouthful or two. I have included here all the smaller snacks or dishes, tapas and other Spanish food which is usually served in bite-sized portions and is not considered to be a main dish (a.k.a a ‘ración’).

Still confused? Never mind, classification is not really necessary here. Spanish snack food can be anything you grab on a small plate, you eat quite fast and most of all which you enjoy!

I didn’t forget our vegetarian and vegan solo travellers who will find in this list at least 3 yummy veggie-based Spanish snacks.

Spanish Snack Food & Tapas You Have to Try: Yes, this one is slightly less traditional Spanish snack food but it’s one of our favourite ones. As the name suggests it’s basically a mini burger made with small, around 5 centimetres wide buns, a tiny piece of beef patty, and mostly served with caramelized onions, gaucha sauce, ketchup or mayo.

There are thousands of mini hamburguesitas snacks in Spain, you can get pulled pork versions, oxtail versions, vegetarian or even vegan mini burgers. I love these hamburguesitas because you can try all of them at once! Two of my favourites are the carillada and oxtail mini-burgers. This will be confusing guys! Because there really are two totally different pinchos out there!

You guess right that this Spanish snack food is part of the strong Moorish influence from centuries ago. Pinchos Morunos is something like a tiny Spanish kebab served with fries (patatas fritas) and usually mayo.

On the other hand, Pintxos are small bready snacks originally from the Basque country – especially from famous foodie cities like San Sebastian and Bilbao. It’s basically a piece of baguette or another type of bread with various toppings like sardines, salads, seafood, etc., all pierced together with a toothpick. In both English and Spanish these are called Pinchos which leads to the confusion about these two very different dishes.

Pintxos are, in my humble opinion, one of the most amazing snack dishes found in the whole Iberian Peninsula! They’re common in the Basque country, but also other northern regions of Spain like Asturias and Catalonia.

The reason I love them might be the fact we have very similar snacks in my home country Slovakia – obložené chlebíčky. Burgos is definitely the best region to go for if you want to eat the most delicious black pudding in Spain. As in other countries which are obsessed with black pudding (Scotland, Poland, Czechia, my country Slovakia), morcilla is made from pork blood, rice, onion, lard, salt and herbs like pepper, paprika, oregano.

Yeah, this mix of ingredients sounds a little bit disgusting but trust me, if you eat and love meat you have to try Morcilla de Burgos. You don’t even have to travel to this northern region of Spain. This meaty Spanish snack food is served across all the country. I enjoy its taste in very southern Andalusia! Morcilla is usually served fried and sliced into small round pieces, in a sandwich or accompanied with peppers. I love morcilla with Pedro Ximenez reduction which adds a super tasty sweetish touch to the salty and greasy meat.

Your translation is correct and I am impressed with your language skills, dear solo travellers! Ensaladilla Rusa means Russian salad and it’s a creamy potato salad with mayonnaise, tuna and eggs served with tiny cubes of vegetables which vary from region to region or restaurant to restaurant.

The most common accompaniments with its Spanish version are capers, gherkins, carrots, pickled pepper (pimiento asada) and/or peas. Even though the name says it all, I feel like adding a tiny bit of the history of Russian salad. This not too heathy but very tasty snack loved by Spaniards was born in the Soviet Union under the name Olivier Salad (салат Оливье, salat Olivye) in the 19th century. It actually isn’t so much Russian because its creator was of Belgian origin!

Anyway, he invented this potato miracle for a restaurant in Moscow. It was so great that Olivier’s sous-chef, later a cuisine enemy named Ivanov stole the recipe directly from Olivier’s kitchen table! He started selling it in a different place under the name ‘capital salad’ or ‘stolichny salad’.

Thanks to this thief the salad got famous all over Moscow, the whole of Russia, post-Soviet countries such as my lovely home Slovakia, and has even travelled to the southern Europe and lovely Spain. What an incredible food story, as I am sure you’ll agree dear solo travellers. Let’s get back to Andalusia! One of the most popular dishes down there is prawns sizzled on olive oil, garlic, paprika and cayenne chillies! Let me introduce you Gambas Pil Pil, a very passionate Spanish snack food considered as one of the best dishes of Europe!

The prawns have to be fresh and cooked very quickly in an earthenware/clay casserole pot (the same one is used for Provoleta preparation). The Gambas Pil Pil are served sizzling hot with crunchy bread. Be careful, the oil from Pil Pil sauce can spatter everywhere and this Spanish snack food is highly addictive!

Cheese addicts, you can’t skip this one! This delicate cheese from Cadiz province received the best cheese in the world award! The name comes from a type of goat living in the Sierra de Cadiz, which is called – unsurprisingly – “payoya”.

There are various different versions of Payoyo cheese, you can choose from goat cheese, goat and sheep cheese, mild, mature, cheese cured with paprika, herbs, etc.

Nobody from the Payoyo company has paid me to write this, don’t you worry. I just honestly think it’s the best cheese I’ve found in Andalusia and it’s my weekend treat when I pick it up in the local markets of Andalusia. Home made provoleta with herbs, olive oil and fresh tomatoes.

Cheese-lovers know that one type of cheese is never enough! No problem dear solo travellers, Spanish people love cheese and one of the most common cheesy snack foods found in Andalusia is Provoleta. Okay, I know it’s not Spanish!

This type of melted cheese dish comes originally from Argentina, but Andalusian people serve it almost in every single tapas place or restaurant.

It’s served hot, even sizzling with a drizzle of olive oil. It can come with garlic, tomatoes, bacon or combined with different types of cheese and it is always accompanied with a basket of bread.

You can get a ‘raw’ Provoleta for this melty Spanish snack nearly in every shop in Spain. It’s called Provolone, which is a trademark for “Argentine pulled-curd Provolone cheese.”

(Btw Provolone is produced also in different countries around the world, and the most famous one comes from Italy). Finally, something for hungry vegan solo travellers! I am so sorry guys, but in general Spanish cuisine is anything but vegan friendly.

Luckily, there are some rare dishes which consist of zero animal fat! Say thank you to beautiful Galicia which is the home of Pimientos del Padrón (in galician ‘Pementos de Padrón’).

This Galician snack was born in a municipality called Padrón, surprisingly enough! Pementos de padrón is made from small peppers roasted in olive oil with crunchy sea-salt drizzle.

The peppers are around 5 centimetres long and their colour might vary from bright green to yellowish green. They make a perfect garnish for more filling dishes but are also nice snacks to be eaten with a glass of wine. Tomates aliñados next to Mejillones al vapor – steamed muscles served cold with a slice of lemon.

I’m still thinking of you, vegetarian eaters! Here’s a completely vegan Spanish snack food which can also be a perfect relish for bigger dishes. That’s Tomates aliñados, an Andalusian spring and summer classic.

They’re usually served like this, but you can find some other versions, for example with an additional tuna belly or other fish on top (sorry ‘no-meaters’!).