The Best Beaches in San Sebastian: Is La Concha Number One?

This list of the best beaches in San Sebastian will be shocking. It’s definitely different than any other list you’ve read so far! 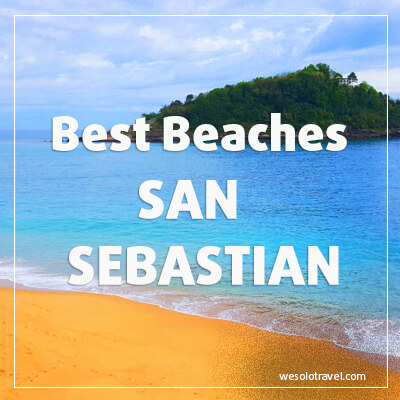 Firstly, I will introduce you to my relationship with San Sebastian. I visited this atmospheric place in May 2019 and stayed over for 3 nights. I travelled solo (finally) and I kept hunting for the most amazing places in this small Basque town almost without a break.

Of course, I had to check all the beaches which make this tiny piece of the planet so unique. I can certainly say that all of them are the best beaches in San Sebastian (after all there are just these three haha), but my number one is shockingly not La Concha as many of you might assume! The Best Beaches in San Sebastian – La Concha on the left, Ondaretta on the right

The Best Beaches in San Sebastian

There are a total of three beautiful beaches in the charming town of San Sebastian. All of them are definitely worth visiting but the question is: which one is the best? Is it really the famously beautiful La Concha (in Basque Kontxa) or is there any other beauty competing in this contest?

1. Ondaretta: My Number One Beach in San Sebastian This is where it starts to be a little bit extraordinary. When you google ‘best beaches in San Sebastian’ I bet that 99% of the articles will claim that it is Kontxa a.k.a La Concha. I was impressed by its beauty too and I still consider it one of the prettiest beaches I’ve seen but it’s not my number one beach in San Sebastian. Let me explain why.

Even though I had goosebumps as soon as I arrived on La Concha promenade and I was stunned by the bay, the golden sand, the view and the spirit of the beach, Ondarreta grabbed my heart even harder. It really depends on what you like. If you prefer busier and more vibrant places, then La Concha will be your favourite. However, I’m keen on more secluded and less popular places, which are smaller, more intimate and peaceful. Therefore, Ondaretta beach was exactly the right place to match up to my personal tastes!

Ondaretta beach was also cleaner and offered lovely views over La Concha bay, the old town, the port and Urgull hill. I spent  a few hours there after climbing down Igueldo hill and spent some of the time learning how to take selfies – so shallow, I know! It’s a perfect place for a relaxing afternoon, activities like jogging, dog walking, reading, chilling with friends or the family.

Yes, Ondaretta is the best beach in San Sebastian, at least for me!

Where is Ondaretta Beach: Ondaretta is the most western beach of San Sebastian. It starts directly after La Concha and finishes under Igueldo hill.

2. La Concha: The Best Beach according to the Public I am saying ‘the public’ because La Concha is without doubt the most popular beach with tourists, solo travellers, and probably the locals from San Sebastian too. As well as that it is regularly name-checked as the number one beach in all of Spain in travel guides like TripAdvisor.

I can totally relate. La Concha is magnificent! It’s known not just for the long stunning promenade, soft golden sand and beautiful 360 views, but also for the irreplaceable atmosphere. As I describe in my My Solo Travel to San Sebastian article, I was totally amazed by its charm and spirit. The place has definitely got a soul and you see happy faces all around because when you come to this place you just feel happy and contented. Why didn’t I choose La Concha as the top beach then? Kontxa is not number one in my list of Best Beaches in San Sebastian because I just felt slightly more attached to Ondaretta. It basically has the same quality of water, the same quality of golden sand but it was emptier, more peaceful and so less noisy and less dirty. It had that vibe of a secluded beach even though it’s definitely not hidden or abandoned.

It’s like the feeling when you love chocolate ice-cream but the same time you’re obsessed with pistachio. You’re crazy about both but when you have to choose just one you go for either chocolate or pistachio, so I chose pistachio! (Nice, now I want some ice-cream).

Anyway, La Concha is a must see in San Sebastian. There no way you want to miss out on this one, it’s the heart of this Basque town like Ondaretta is its soul (getting poetic over here).

Where is La Concha beach: La Concha, in Basque Kontxa, is the middle beach of San Sebastian. It stretches all the way from the Old town to the beginning of Ondaretta beach. It also happens to be the longest and biggest beach in the town. The header might sound funny because when I visited Zurriola it was very crowded. So why does it need more attention? It was full, that’s right, but it was mostly local people of all ages who were hanging around Zurriola beach.

There was a group of kids playing – on their phones obviously – there was a group of teenagers listening to music and dancing, there were old people having a lovely evening walk, families, surfers, all the generations and all the categories of people you can imagine.

Is there anything wrong with Zurriola? Why isn’t it number one on the list of the most beautiful beaches in San Sebastian? Zurriola is pretty too and it deserves more attention from travellers and tourists, that’s what I’d say. The thing is that it seemed for me like a local people’s beach where they chill and hang out, rather than an extremely good-looking place, the jewel of San Sebastian. Do you get me? You have a lovely view from Zurriola too. It overlooks the place where the magic happens, where the river meets the sea and the sea meets the city. You can sit on a nice wall looking to the north, watching the sea or you can turn to the south and see the three bridges connecting the two sides of San Sebastian which are divided by the river Urumea.

Yes, there is something about Zurriola, but for me it looked more like a city beach while both Ondaretta and La Concha gave me some kind of a special holiday feeling. They’re just nicer, that’s it! (It’s like you love pistachio, you very much like chocolate and are pretty fond of banana ice-cream too!)

Where is Zurriola beach: Zurriola is the most easterly beach of San Sebastian, situated on the other side of the Urumea river which is the newer part of this charming city. I hope you find this list of the best beaches in San Sebastian helpful. If you managed to visit the town, either solo, with friends or with your loved ones, let me know which beach did you like the most. Chocolate, pistachio or banana?