Med Steps of Gibraltar: Ultimate Guide for Your Hike

Is Gibraltar on your next travel itinerary, and you are wondering how to fully enjoy the monumental rock everybody’s talking about? Climb the Rock’s Mediterranean Steps and you’ll definitely do something to satisfy your eyes’ hunger for views as well as your body’s need for exercise. The Rock of Gibraltar is the ultimate number one attraction to visit in this UK overseas territory. It’s not just the cute & foolish monkeys you will meet up there, but also the never-ending seascape views and the greenery which gives you the feeling that you’re walking through a jungle!

And one of the best ways to enjoy the purest nature of the Gib rock is getting up to the top via the so-called Med Steps (the Mediterranean Steps, to give them their full name). If you need a few more tips & pictures to make the decision on whether to sacrifice your sweat on the Med steps, just scroll down because I have prepared a little guide for you! A view from the Jewish gate

Where Exactly are the Mediterranean Steps? How to Get There?

The Med Steps are located on the eastern part of the Rock of Gibraltar, starting at the Jewish gate (the place where the famous Pillars of Hercules stands). Their path continues on the southeast, all around the rock to reach the very top of this massive ‘stone‘ (yes, I know it’s not really a stone but I can’t keep using the word ‘rock‘ over and over again!).

After you get up to the Jewish gate you must pay a visitor’s fee of £5 to access the Med Steps. The Jewish gate is situated around 40 minutes on foot from Casemates Square, you can also take several buses to get there. Number 10 will leave you by the Cable Cars, number 2 stops even closer to the Jewish gate, and so on. One of the first views from getting to the Med Steps

On the left side of the ticket office you’ll see a sign saying ‘Mediterranean Steps’. Just take a few steps up a little hill and you’ll see that the route divides into left and right. Don’t make a mistake – like I did when I hiked the Med Steps for first time – instead, take the correct route, which is the right-hand fork!

If you take the left path by mistake, after about 10 minutes of walking through bushes you come out on the regular concrete pathway up to the rock. Although this is not the Med Steps route, the views are still wonderful, you can meet some giggling monkeys on the way up and you can connect to the top of the Med Steps by walking up to the summit of the rock of Gibraltar via this concrete path. Why Should I Explore the Gib Rock via the Med Steps?

If you’re a nature lover, the Med Steps are definitely the best way to explore the local flora and fauna. There is nothing but nature around you and stunning views across the Mediterranean Sea, and there are a lot fewer tankers and ships on the eastern side than on the western one.

Also, the rest of the Rock is reachable by cars, and taxi tours are very popular here. By taking the Med Steps you avoid any confrontation with the quite frequent tourist taxis and buses. This means that the air is cleaner on the Med Steps too J

There is no need for you to take the Med Steps both ways. You can climb up the Med Steps and then get down via one of the entrances / exits to also enjoy the western side of the Rock of Gibraltar. What Shall I Bring with Me?

Five pounds, comfortable shoes, sun blocker, sunglasses, lots of water, and some snacks should come with you in a backpack. Be careful where you open your snack though; I’d definitely avoid doing it in front of the always-hungry monkeys which could easily jump onto you and fight for a piece of banana! (Anyway, you’re not supposed to feed them, they are looked after by nature wardens on the Rock).

What Else is Worth Seeing on the Gib Rock?

The Jewish gate gives you some pretty lovely views to Africa, and from the top of the rock you can see basically everything and everywhere, including those monkeys… There are a few caves to explore but you will need to pay a separate fee for that. I like the dangerous bridge hanging just before the Cable car line. There is also a recently built skywalk, and on the northern side you’ve got some cool cannons to check out. How Can I get up The Gib Rock?

You can go up to the rock by hiking – this is definitely the best way in terms of enjoyment and also the most environmentally friendly. There are some taxi guides available from the border and the middle of Main Street in Gibraltar centre. However, I’d only recommend these for people with disabilities, elderly people or very little kids or people who have less than an hour to explore the Rock of Gibraltar.

I took one of these taxi tours on a previous visit and it was very quick, chaotic and really didn’t show me and my mum the true beauty of the place. Also, it is pretty nice to take a lovely sunny hike up the rock without having to sidestep every second minute to avoid being hit by a car. Cars on the rock are really not environmentally friendly either… So think twice before you jump in one of the white taxis in the city! 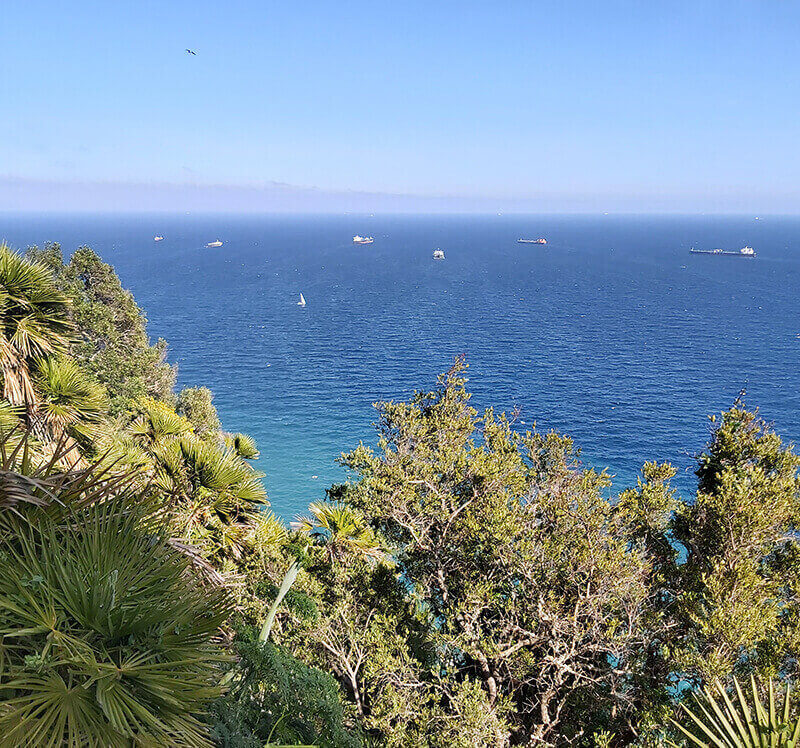 The third choice is via cable car, which is a bit more expensive (£16.00 return) but is a nice way to get to the top super-fast: it takes only 6 minutes! It is also a little bit more exciting than a car journey – you know what I‘m talking about – those little tingles in your belly when you see nothing but the tiny world below your feet!

I hope this little guide has helped you to decide whether the Mediterranean  Steps are the journey to take on your Gib rock adventures. If you have any questions or additional remarks just comment below and I will be more than happy to help you!

previousTOP 9 Things to Do in Nice: Mont Boron, Vieux Nice & More
nextOne Day in Malaga: What to See & What to do?